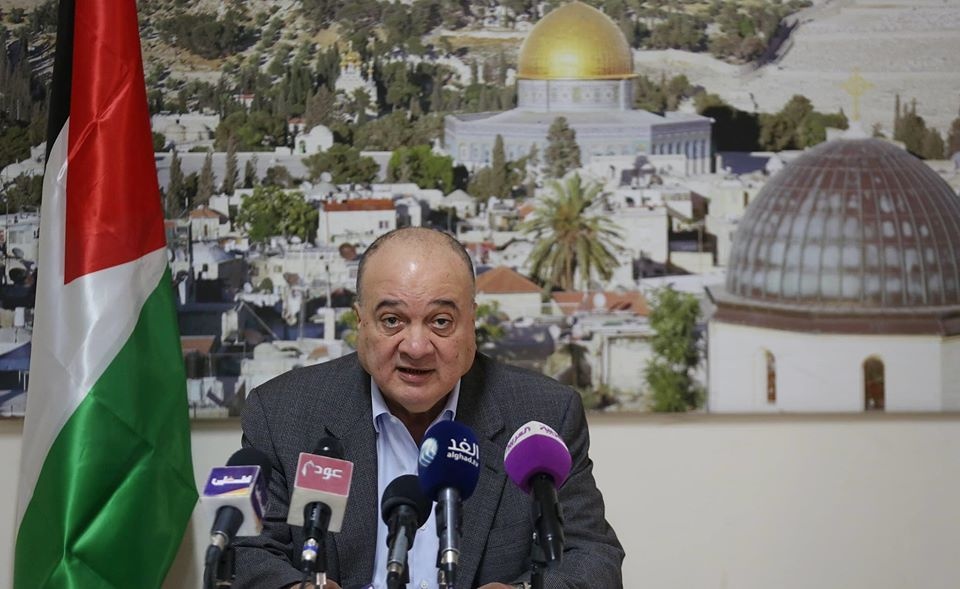 In a broad-ranging video discussion on the novel coronavirus, Dr. Nasser Alkidwa, Chairman of the Board of Directors of Yasser Arafat Foundation and member of the Central Committee of Fatah, emphasized the necessity to implement a national strategy to deal with Israel’s intentions to the Jordan Valley and all of the West Bank. He also stressed the importance of remaining vigilant and of all Israeli actions, including its settler colonialist expansion and violence against the Palestinian people.

The Zoom discussion was organized by Yasser Arafat Foundation on the 26th of April 2020, following the publication in Arabic and English of Dr. Alkidwa’s article, “Novel Coronavirus.”

Warning of the dangers of the situation, he urged that decisions be neither postponed nor equivocal to prevent the impression of a lack of a definitive position.  Dr. Alkidwa called for the adoption of a national strategy of action in three areas:  the Arab countries, particularly those that have been effective; the European Union; and the United States, particularly toward Democratic presidential candidate Joe Biden.  He clarified that assessments Israel will implement the annexation process in July means that there are but two months to mobilize and prepare crucial determinations visualized within a national strategy.  The decisions and required national positions should be clear and decisive, as Israel has cancelled all signed agreements.  No Palestinian party should declare their cancellation of any agreement as Israel has already done so and must be held accountable for its actions.

Dr. Alkidwa opened the discussion with a summary of his article, published on the 22nd of April 2020, addressing seven aspects [of the COVID-19 pandemic]:  Novel Coronavirus; Novel Coronavirus in Our Country; Coronavirus and Israel; Influenza and Novel Coronavirus; Novel Coronavirus Globally; The World is No Longer a Small Village; and What is Next for Coronavirus?  He discussed the rapid outbreak of the virus and global measures to limit the spread of this pandemic.
Dr. Alkidwa described the measures taken by Yasser Arafat Foundation during the early stage of the crisis:  postponing the Board of Trustees Meeting in Cairo which was to be held on the 5th of March 2020, and then closing the Foundation and Yasser Arafat Museum following the President’s decree of a 30-day state of emergency.
In describing Israel’s identification of “the economic sectors that require Palestinian labor” and declaration “that it will not permit the movement of workers between Israel and the Palestinian territories, but has allowed workers in these sectors to remain for three months in Israel under the responsibility of the employer,” Dr. Alkidwa observed that “this is a characterization of the usual Israeli opportunism – but it has not stopped there.  The Israeli authorities have thrown any worker with symptoms of infection at the nearest checkpoint, creating a major problem for the Palestinian side, and their opportunistic attitude has turned into a vile, immoral one.”
Dr. Alkidwa also talked about [the sweeping] changes that have already taken place, perhaps the most conspicuous being the disconnection of the world, the cessation of travel and movement, the severing of the economic supply chain – as if the world is no longer the small village it was – and the total absence of the United States from the international stage and incapacity to play any leadership role in the face of the pandemic.  He also pointed out the actions of extremist Evangelical Christians who have played a very negative role, not only in their support for Trump but also in their opposition to directives to stay in place and demonstrating and sloganeering against the measures.

Dr. Alkidwa observed that “women will emerge as winners from this pandemic.  It simply affirmed their clear leadership role in handling responsibilities.  Women have always maintained this has ever been the case, at least in most societies, but this current situation has reaffirmed their role … What is interesting is that many have observed that countries led by women were more successful in handling the crisis than those led by men in comparable states.  Perhaps in some conservative societies, this phenomenon will not be as apparent or even possible but in other societies, it seems inevitable that women will continue to rise to positions that attest to their independent leadership capabilities.”

Bringing his remarks to a close, Dr. Alkidwa offered possible scenarios to end the pandemic: “We do not really know, although there is a serious possibility that the pandemic might be alleviated during the summer, though it might be followed by a second wave in the coming winter, before a vaccine and cure [are developed].  We do not know if the countries of the Middle East, including Palestine, will also see a lighter version of the pandemic.  In other words, what I mean is that our countries may have a second chance – a rare thing in this life.  If this does not happen, and the virus disappears until a vaccine is found, without a second wave occurring, we will not have lost anything due to our precautions, and all humankind will be in a better condition.  The third and final scenario is that the virus will not disappear and may continue or increase until we find a vaccine or remedies.”

Some of the participants shared their personal experiences, expectations and general assessments on the coronavirus crisis and the actions taken on the Palestinian, Arab and international levels.  Their conversation focused on the human, medical, economic, religious and social aspects, and their impact on globalization – some believe that globalization will be weakened and other that it will be strengthened.  The participants also discussed the special situation in the occupied Palestinian territory and the need to learn from the current experience, and called for greater efforts to restore national unity, in light of the dire situation of the Palestinian people in the Gaza Strip due to the siege and inadequate management of the situation there.